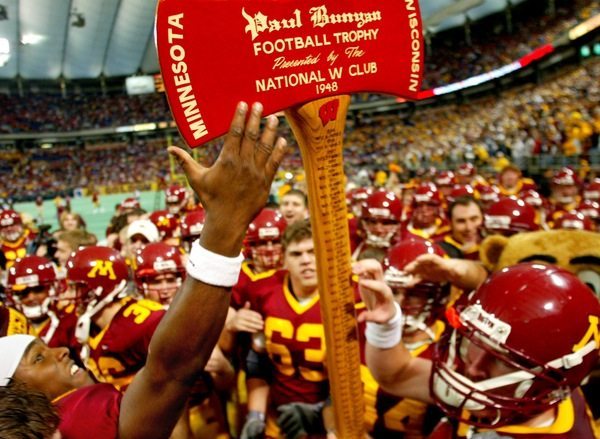 Minnesota needs one more win to secure a bowl berth, and the Golden Gophers are well-positioned to do just that as they are a 14-2 ATS in the second half of the season over the last three years, including a perfect 7-0 ATS in the month of November. The Gophers take the field with a very good defense that is allowing 5.0 yards per play to teams that would combine to average 5.6 yards per play against a mediocre defensive squad.

That leaves Wisconsin to its non-existent ground game, which was held to minus 26 yards last week by Northwestern. For the season, the Badgers are averaging just 3.8 yards per rush play against teams that would combine to allow 4.1 yards per rush attempt. Wisconsin is now without once-promising running back Cory Clement, who has been suspended the next two weeks effective 7 p.m. Saturday. Clement was issued two citations for disorderly conduct earlier this season and will not travel with the team for today’s rivalry game.

Motivation will be running high for the Gophers, who haven’t won the battle for Paul Bunyan’s Axe since 2003. “I told the O-line on Saturday after the (Illinois) game that we take a group picture after every time we win one of the trophy games, and I still don’t have one,” offensive coordinator Matt Limegrover said. “I have a space open in my den for one of those, for the Axe. Everybody knows and everybody will be ready to go. Those kids will play their tail ends off. They understand.”

Senior offensive lineman Jon Christenson is hell-bent on winning the Axe before leaving the program. “Not having beat them yet in my career,” he said, “it will be something that will be pretty special when we do.”  Minnesota has also played one of the toughest schedules in the nation, facing (AP rankings at time of the game) No. 1 Ohio State, No. 2 TCU, No. 8 Iowa, No. 15 Michigan and No. 16 Northwestern.

Minnesota is the only Big Ten team to play (AP rankings at time of game) No. 1 Ohio State, No. 8 Iowa, No. 15 Michigan, No. 16 Northwestern and Wisconsin this year (teams have a combined 47-8 record).  In fact, the Gophers’ six losses this year have come against teams with a combined 53-13 record, with Nebraska having 6 of those 13 losses!

As if securing both a bowl berth and the Paul Bunyan Axe were not motivation enough, the Gophers are driven by a desire to bring former head coach Jerry Kill on a bowl trip after he was forced to resign earlier in the season due to epilepsy. Finally, Minnesota is a perfect 9-0 ATS in its last nine games with conference revenge, whereas the Badgers are 2-6 ATS versus avenging foes.  Grab the points in this heated college football rivalry and invest with confidence.