Five Things to Watch in the 2022 NFL Season 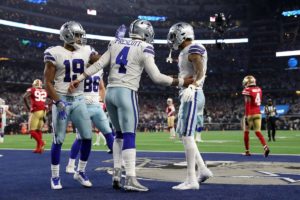 In less than a month, the 2022 NFL season will have kicked off and fans and bettors alike will be back in business. The Buffalo Bills are favored to win Super Bowl LVII. The Bills quarterback, Josh Allen, is the favorite to win the league’s MVP. How will it all play out?

That’s the beauty of a new NFL season. We can attempt to predict outcomes, but the ball has a funny way of bouncing sometimes. Here are X things to watch this season. Each will have an effect on the 2022 NFL season as a whole.

Packers QB Aaron Rodgers has won the last two straight NFL MVP awards. Winning a third in a row would tie him with the guy he replaced in Green Bay – Brett Favre – as the only players in NFL history to win three straight MVPs.

This wasn’t the plan. The Packers drafted Jordan Love with the expectation he would eventually replace Rodgers. That isn’t happening anytime soon. Rodgers just signed a $150 million contract extension for the next three seasons.

The problem Rodgers will have this season is at receiver. Davante Adams is gone and so is Marquez Valdez-Scantling. The type of season Rodgers has will not only determine his MVP hopes but also if the Packers are a Super Bowl team.

Mike McCarthy won a Super Bowl and a number of division titles in Green Bay. A couple of mediocre seasons led to his demise there. Now in Dallas, McCarthy went 12-5 and won an NFC East title in Dallas. For doing that, he is now on the proverbial coach’s hot seat.

The Cowboys were knocked out of the playoffs in the wild card round by the 49ers last season. Owner Jerry Jones is getting impatient. Dallas hasn’t even been to a conference championship since the Super Bowl-winning season of 1995.

McCarthy is going to have to go deeper in the postseason in 2022. He’ll have to do so without the likes of Amari Cooper, Randy Gregory, Cedrick Wilson Jr., and a few others. Dallas is still talented enough to get back to where they were a year ago. Will that be enough?

Tua or Not Tua?

The Miami Dolphins could have had Justin Herbert but instead chose Tua Tagovailoa with the fifth overall pick in the 2020 draft. Herbert and the Chargers are among this year’s Super Bowl favorites. Tua’s Dolphins are not.

Tua has had his moments. He just hasn’t had enough of them. In his third season, the Dolphins quarterback will have everything he needs. He has a solid offensive line and a number of receiving threats – Tyreek Hill, Cedrick Wilson Jr., and Jaylen Waddle. Miami upgraded at running back too with Sony Michel, Chase Edmonds, and Raheem Mostert.

In new head coach Mike McDaniel’s first season, it’s time for Tua to step up or step out of Miami.

Cleveland looked like it might be turning the corner on one of professional sports’ longest periods of ineptitude. The Browns made the playoffs in 2020 but blew it last year. Then came the fiasco.

The Browns traded for beleaguered Houston quarterback Deshaun Watson. Great move, right? It was until his whole massage-gone-bad ordeal turned into what is now an 11-game suspension. Watson could return in Week 13. Can Jacoby Brissett keep the Browns within striking distance of a playoff berth?

Who knows, but how it all plays out will determine the Browns’ immediate future.

The NFC has won each of the past two Super Bowls, but the balance of power is shifting to the AFC. Two of the top three Super Bowl favorites at most sportsbooks – Buffalo and Kansas City – are from the AFC.

Russell Wilson, Matt Ryan, and Khalil Mack, among a number of others, are all now playing for AFC teams. The AFC West, which now features Wilson (Broncos) and Mack (Chargers), is regarded as the toughest division in the NFL.

Could this be the year an AFC team wins another Super Bowl?