Expanding the College Football Playoff Is Not the Answer 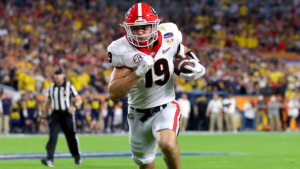 It seems as though after every college football season the talks of expanding the College Football Playoff begin. Bigger is better, right? There are championship tournaments at every level of NCAA football – Division III, Division II, and FCS. They work, don’t they? Why can’t it work at the FBS level?

Attempting to find college football’s best team has been something the sport has been searching for since its beginning. It started with the media arbitrarily picking a champion. Slowly, a system developed where the top two teams were pitted together to play for a national championship. That has evolved into what we have today – a four-team playoff.

There is a push now for a 12-team playoff. It’s not the answer.

Expanding the CFP will simply allow teams not worthy of winning a championship to have the opportunity to win one. Now, the proposed 12-team playoff talks about some automatic berths for certain conferences. Let’s just work with the CFP top 12 after the conference championships last year.

No. 11 was a 10-3 Utah. Three losses. No. 10 was 10-2 Michigan State. The Spartans didn’t win their conference. They didn’t even win their division within the conference. The same is true of No. 8 Ole Miss. Pittsburgh, the ACC champion, finished 11-2 and ranked No. 12. They might be worthy of a title, right? Well, maybe if the Panthers hadn’t lost to Western Michigan they might have had a shot.

The bottom line is this. If you expand the CFP, you allow teams undeserving into the mix. Plus, you diminish the importance of the regular season. Winning a conference championship becomes less of a priority than getting to the playoff.

There will always be the argument that too many games are played in a college football season. Expanding the playoff would mean that some teams will play 16, maybe 17, games in a season. For coaches and players, that’s just too many for 18- to 22-year-old student-athletes.

Currently, the ACC is against the expanded playoff. One of the problems cited is a lack of players. With the current scholarship limit at 85 and the emergence of the transfer portal, schools are having a hard time filling out rosters. It almost sounds ridiculous, but ACC schools are losing 10 to 11 players each just to the transfer portal. When you add in graduation, injuries, COVID, and other factors just getting to 85 players becomes a challenge.

Then, there is the whole bowl problem. Bowl games are part of the tradition of college football. Plus, they are huge moneymakers. They will not simply go away. Any playoff will have to somehow weave in the current bowl structure. That could be difficult.

The full answer is beyond the scope of this article, but here is the short version. Reorganize FBS into 128 teams and eight conferences. Each conference has 16 teams made up of two divisions of eight. All teams play 11 regular-season games. Each team plays every other team in its division and then crosses over to play two from other conference divisions. The remaining two games can be used to keep long-standing rivalries – Texas A&M-Texas, for example.

Cut the bowls down to 25. Fifty teams make it. That’s it. Imagine how important the regular season becomes when only 50 teams out of 128 play in the postseason. As part of that bowl system, we take the top four bowls – Rose, Sugar, Orange, and either the Cotton or Fiesta (take your pick). These four games are used to help determine the playoff field.

Once the bowl season concludes, then you can figure out the playoff. In order to automatically qualify, a team must be a conference championship, win a major (Rose, Sugar, Orange, Cotton/Fiesta) bowl game, and be ranked No. 1, 2, or 3. A Group 4 team can qualify if it wins its conference, wins a major bowl game, and is unbeaten. Finally, teams can earn a wild card if they have either a conference title or major bowl win and they are ranked No. 1 or 2.

You maintain a selection committee in order to get it right. In some years, like the present, you will have a four-team playoff. In some years, there may only be two teams that qualify. Sometimes, there might be three. You simply have No. 2 and 3 play with the winner playing No. 1 for the title.

While this makes sense, the bigger issue is money. Expanding the playoff will make TV networks, the NCAA, and college football programs more money. And when money talks, we will see three- and four-loss teams playing for the right to win a national championship…and that’s not the answer.