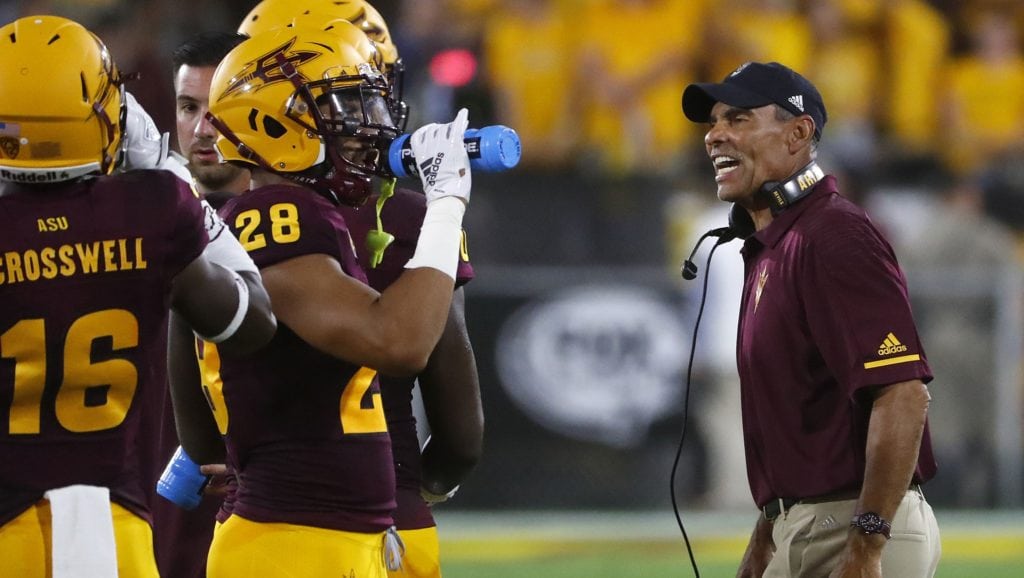 Oskeim Sports previews Saturday’s college football game between the Arizona State Sun Devils and Colorado Buffaloes.  Oskeim recommends taking the points with the Sun Devils as one of his daily sports picks for October 6.

The Herm Edwards’ era got off to a quick start in Tempe as Arizona State upset Michigan State 16-13 as 4.5-point underdogs in Week Two.  Following back-to-back losses at San Diego State (28-21) and Washington (27-20), the Sun Devils returned home and defeated Oregon State 52-24.

Arizona State possesses a powerful ground attack that is averaging 181 rushing yards per game at 5.1 yards per rush play against teams that would combine to allow 3.9 yards per rush attempt to a mediocre offense.

Edwards has emphasized the importance of being able to run the ball and wants offensive coordinator Rob Likens to maintain a run-first mindset.  The Sun Devils had 396 yards rushing against Oregon State last week, including a school-record 312 yards from Eno Benjamin.

“It was magnificent,” Edwards said of Benjamin’s record-breaking performance. “When you watched the tape, he did a great job of making yards once he was hit. Everything wasn’t clean, but he made yards after contact and that’s what good backs do.  He had tremendous balance.  He just ran at a different level.  The offensive line blocked well.  They had the whole thing going.”

The Sun Devils should have another strong game on the ground against a suspect Colorado defensive front seven that is allowing 4.1 yards per rush attempt to teams that would combine to average just 3.4 yards per rush play against a mediocre stop unit.

The disparity in the team’s respective strength of schedules is also quite illuminating.  Arizona State is 3-2 SU and 4-1 ATS after playing UTSA, Michigan State, San Diego State, Washington and Oregon State.  The Buffaloes are 4-0 SU and 3-1 ATS after facing Colorado State, Nebraska, New Hampshire and UCLA.

The Buffaloes opened the season against a Colorado State team missing its head coach (hospitalized) and played two other opponents (Nebraska, UCLA) who are learning new schemes on both sides of the ball under first-year head coaches.

Arizona State has covered the point spread in four straight conference affairs and is 7-2 ATS in the last nine meetings in this series.  In contrast, the Buffaloes are just 3-8-1 ATS in their last twelve conference games, 2-6 ATS in their previous eight games following a win and 0-4-1ATS in their last five clashes against .501 or greater opposition.

Finally, my math model actually favors Arizona State by 1.02 points in this game.  With Colorado standing at 16-34-1 ATS in October affairs and 2-5-1 ATS in its past eight home games, grab the points with the Sun Devils as one of Oskeim Sports’ free daily sports picks for Saturday, October 6.