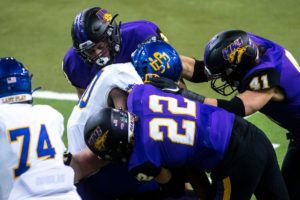 Looking for the next big college football upset? Here’s where you may find it.

If you’ve been a fan of college football long enough, you may remember Appalachian State’s shocking victory over Michigan in 2007. The Mountaineers, now an FBS program, were members of FCS at the time. Last year, 12 FCS teams pulled the upset over their FBS opponents. What’s even more amazing is that four FCS teams beat Power 5 opponents.

Montana beat Washington 13-7. East Tennessee State beat Vanderbilt 23-3. Jacksonville State, which will join FBS in 2023, upset Florida State 20-17 and Northern Arizona pulled off a 21-19 win over Arizona. Two of those schools – Washington and Vanderbilt – now have new head coaches in 2022.

Heading into the 2022 season, there are 54 games between an FCS program and a Power 5 school. These used to be guaranteed victories. That doesn’t seem to be the case anymore. Which FCS team (or teams) will it be this year? Who will pull the upset special of the season?

In 2012, Sacramento State recorded a win over an FBS program. The Hornets beat Colorado. In 2022, the Hornets will take on Colorado State. The Rams are coming off a 3-9 season last year, a season in which they lost to an FCS program. Colorado State lost its season opener at home to South Dakota State, 42-23.

Colorado State hasn’t been good for a while. In the last ten seasons, the Rams have lost three games to FCS opponents. The Big Sky posted four of the 12 wins over FBS programs last season. Keep Sept. 24 in mind on your betting calendar. The Hornets just might pull another upset.

As mentioned, the Jackrabbits pulled an upset last year when they not only beat Colorado State; but they won by double digits. South Dakota State is one of the best FCS programs in the country. They will begin the 2022 season ranked No. 2 in the FCS poll.

The Jackrabbits will take on Iowa, which went 10-4 last season. The Hawkeyes are usually one of the better teams in the Big Ten, but even as good as they have been Iowa lost to an FCS opponent in 2016. That opponent was North Dakota State, the premier FCS program in the country. The Jackrabbits play in the same conference as the Bison and are a perennial playoff team.

South Dakota State has done it before and Iowa might be looking ahead to Sept. 10 when play rival Iowa State at home. Check out the Jackrabbits at Iowa on Sept. 3.

Speaking of North Dakota State, the Bison love to play great competition as they prepare to win another FCS national championship. This season, it will be Arizona.

It’s getting to the point where an NDSU victory over an FBS program isn’t really an upset, but the Bison will have the opportunity to do just that again when they face the Wildcats. Don’t forget, Arizona lost to FCS Northern Arizona last season. The Wildcats went 1-11 in 2021.

Interestingly, at least one team from NDSU’s conference – the Missouri Valley – has recorded a win over an FBS program in every full season (not counting COVID-shortened 2020) since 2010.

Illinois has had a tough go of it lately and it might not get much better in 2022. The Illini are picked to finish last in the Big Ten West Division this season. Illinois hasn’t had a winning season since 2011 though head coach Bret Bielema did get the Illini to five wins last year.

Chattanooga is one of the favorites to win the Southern Conference in 2022. The Mocs are ranked 25th in the FCS preseason poll. Last year, Chattanooga lost two games to FBS opponents. Both were by single-digits – one by three points and the other by five. A majority of the team’s starters return, including All-American OL McClendon Curtis. Keep an eye on Sept. 24 for this one.