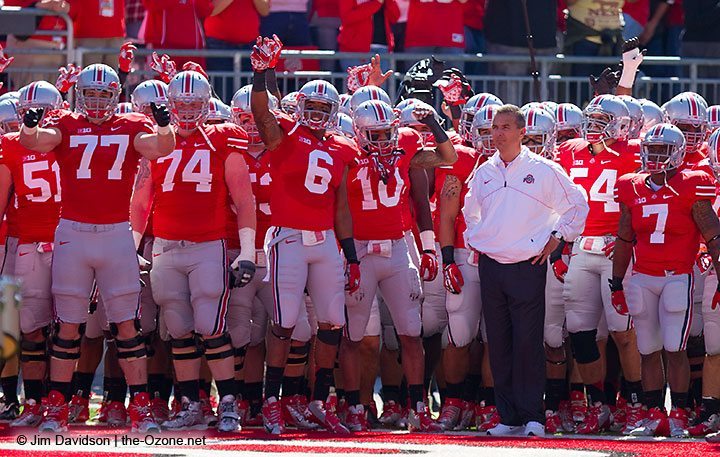 Ohio State takes the field with legitimate revenge after suffering a 34-24 loss to Michigan State in the Big Ten Conference Championship game, which effectively dashed the Buckeyes’ hopes of a National Title appearance.  And, revenge is squarely on the minds of Ohio State players.  “It’s time for revenge.  It’s time to take care of business in East Lansing,” said quarterback J.T. Barrett.

Michigan State head coach Mark Dantonio added fuel to the fire yesterday by going on the record saying the Spartans had a win waiting for them on Saturday against Ohio State.  Dantonio’s comments came on ESPN’s First Take in response to a question asked by Cari Champion.  Asked by Champion, “We got a win coming tomorrow, right?”  Dantonio responded: “We got a win.”

I can assure you that that guarantee is posted all over Ohio State’s locker room, which is the last thing Michigan State players wanted at this juncture of the season with a potential playoff berth looming in the future.  Let’s also note that Ohio State has won its last four trips to East Lansing, while the Spartans are a money-burning 4-8 ATS in their last twelve conference games as home favorites.

Obviously, Ohio State is going to throw the ball in order to move the chains, and I believe Barrett will have success doing so based upon the fundamental numbers above.  Ohio State also possesses a very good defense that is allowing 19.9 points per game on 299 yards at 4.5 yards per play to teams that would combine to average 5.5 yards per play against a mediocre defensive squad.  Overall, the Buckeyes are 0.7 yards per rush play, 1.3 yards per pass play and 1.0 yards per play better than average defensively this season.

Michigan State’s offense has enjoyed a tremendous amount of success this season as the Spartans are averaging 45.5 points per game on 515 yards at 6.7 yards per play against teams that would combine to allow 5.9 yards per play to a mediocre offensive squad.

Finally, Ohio State head coach Urban Meyer is 18-5 ATS as an underdog, 26-8 ATS after covering the spread in five of his last six games and 23-10 ATS versus elite opposition (win percentage of .751 or greater).  Grab the points with the Buckeyes and invest with confidence.