College Football Head Coaches Who Must Win in 2022 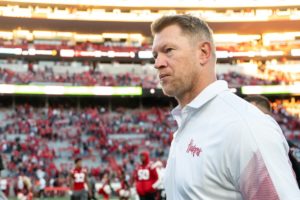 There were 29 coaching changes at the FBS level last season. Over the last three seasons combined, 67 FBS schools have hired new head coaches. That tells you something. Win or else.

There are a number of coaches facing intense pressure to win in 2022. Those coaches are going to have to produce or they will be next on the chopping block. Here are the CFB head coaches who must win in 2022 or face the consequences.

Frost is Nebraska’s golden child. He led the program to a national championship as the starting quarterback in the 1990s. Frost came home after success as the UCF head coach. His homecoming has been pretty rough.

In four seasons the Cornhuskers are 15-29. Last season, Nebraska went 3-9. The upside of that is that all nine losses were by nine points or less. Frost’s team was in every game, but still, this is a sport measured by wins and losses.

In 2022, Frost likely has his best team. A winning season is a must. Anything less and Frost will be out.

Harsin left what was really his dream job – Boise State – for the SEC. He played quarterback for the Broncos, worked as an assistant there, and then took over the program in 2014. In seven seasons, Harsin went 69-19 and won three Mountain West Conference championships.

He moved onto Auburn last season and started 6-2. Then, the Tigers lost five straight to close the season. Then came an investigation into Harsin. He remains the Tigers head coach, but 6-7 will never cut it at an SEC program that expects so much more.

Collins leaves Tech fans craving the old triple-option offense of predecessor Paul Johnson. Collins retooled the offense. It went from 16.7 points a game in 2019 to 24 per game last season. Collins thing is defense, which has been a disaster for the Yellow Jackets. In Collins’ three seasons, Georgia Tech has allowed an average of over 32 points per game.

The results speak for themselves. Georgia Tech has won just three games in each of Collins’ three seasons. The Yellow Jackets are 7-18 in the ACC and last year they ended the season with consecutive shutout losses to Notre Dame and Georgia by a combined score of 100-0. A winning season might not be enough to save Collins.

Babers was all the rage when he came to Syracuse. His up-tempo offense was going to help the Orange do great things. After consecutive 4-8 seasons, Babers led Syracuse to a 10-3 mark in 2018. But, it’s been downhill ever since.

Edwards has done a decent job at Arizona State where the Sun Devils are 25-18 during his tenure. They are only 17-14 in the Pac-12 though. While the record is okay, it’s some off-the-field stuff that may lead to Edwards’ ouster.

The NCAA is looking into some recruiting violations. Edwards might not be involved, but he’s the guy in charge. The investigation is ongoing and a subpar season would simply add fuel to the “fire Edwards” fire.