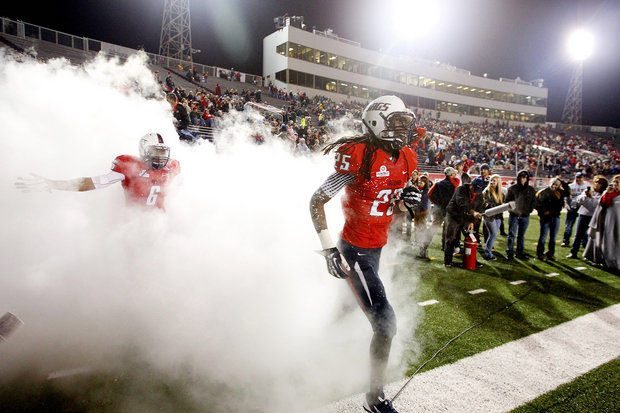 Coaching continuity has been extremely important for South Alabama as Joey Jones has been the only head coach of the football program.  Jones has done a terrific job with the program as the Jaguars are coming off a 6-6 season in which they pulled upsets over Tulane (41-39; 6-point underdog) and Western Kentucky (31-24; 7-point underdogs), while easily covering the point spread against Tennessee, Troy, Kent State, UL-Monroe, Georgia State and Louisiana.  Five of South Alabama’s losses last season came by a combined twelve points (1, 7, 1, 2 and 1 point, respectively). With fifteen returning starters, including the Sun Belt Conference’s best wide receiving corp., the Jaguars are legitimate contenders for the conference title.

South Alabama possesses the conference’s best wide receiving corp. led by two Alabama transfers in Danny Woodson and Marvin Shinn.  Offensive coordinator Robert Matthews called Shinn the “best scout team player the program had ever had.”  The Jaguars also return last year’s leading receiver in senior Shavarez Smith, who garnered 940 yards on 18.8 yards per pass reception.  Throwing the ball to this elite unit is senior quarterback Brandon Bridge, an Alcorn State transfer who has the ability to make plays with his legs.  Bridge was 15-of-25 for 161 yards and one touchdown in the Jaguars’ 23-13 win over Kent State last week.

South Alabama’s backfield is led by returning senior Jay Jones, who led the team in rushing last season with 737 yards at 5.2 yards per carry (135 receiving yards). Jones looked very good in the Jaguars’ season opener last week wherein he compiled 102 rushing yards and two touchdowns.  I also like the fact that the Jaguars’ boast the Sun Belt’s best offensive line that returns 102 career starts in 2014 (only 29 last year).  The bedrock of the offensive line is tackles Chris May and Ucambre Williams, both of whom were All-Conference last year.  I expect South Alabama to exploit a surprising-vulnerable Bulldog defense that yielded 548 total yards to UAB last week, including giving up three touchdown passes of 75 yards or more.

With three returning seniors in Qudarius Ford, Montell Garner and Terrell Brigham, the Jaguars have their best secondary under coach Jones.  South Alabama’s defensive line is also adequate, but the biggest improvement will come with the Jaguars’ special teams unit that should finish in the top 50 nationally in 2014. Meanwhile, the biggest concerns surrounding Mississippi State’s offense this season is its ground game as the Bulldogs lost leading rusher LaDarius Perkins. Mississippi State also lost #3 career passer Tyler Russell, who broke eleven school records and became the first Bulldog quarterback to be chosen for the Maxwell Award Watch List.

While Russell was injured for most of last year, returning quarterback Dak Prescott proved to be more than capable with his legs as he led the team with 829 rushing yards at 6.2 yards per carry and 13 touchdowns.  I’m still not convinced that Prescott is capable of throwing accurately from the pocket, and his task will become that more difficult against a well-seasoned South Alabama secondary.  The Bulldogs will also be learning new schemes under new offensive coordinators Billy Gonzales and John Hevesy.  Mississippi State also has one of the worst special team’s units in the SEC.

The situation strongly favors South Alabama as the Bulldogs have three “look-ahead’ games on deck against LSU, Texas A&M and Auburn.  The LSU game is most relevant in that the Bulldogs will be looking to avenge a 59-26 white-washing at the hands of the Tigers last year.  From a technical standpoint, Mississippi Stat head coach Dan Mullen is a money-burning 4-24 SU and 9-19 ATS versus .750 or better opposition and 2-4 SU and ATS in his last six road openers.  South Alabama’s Ladd-Peebles Stadium will certainly be electric with an SEC foe coming to town, although it should be noted that the Bulldogs sold out of their allotted tickets for this game so there will be a decent number of cowboys in the stands.

My math model favors Mississippi State by just 11.5-points and the Bulldogs apply to a very negative 12-54-1 ATS road letdown situation, which also contains a 15-0 ATS look-ahead subset angle.  Grab the generous points in this college football matchup and invest with confidence.