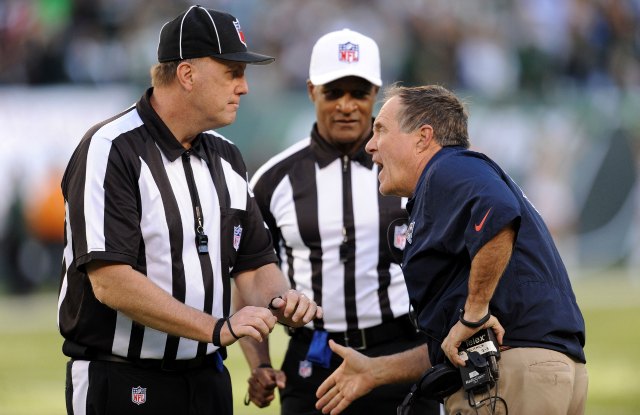 The New England Patriots lost a close game to their division rival, the New York Jets, on Sunday due to a controversial last-minute penalty – one that had never before been called in the NFL. Patriots coach Bill Belichick has talked about the penalty more than once since then, appearing to slightly adjust his opinion over time.

The penalty in question occurred during the overtime period at the end of the game, with the Patriots and the Jets locked at 27 points apiece. New England initially appeared to have made a key defensive stop, forcing New York kicker Nick Folk to attempt, and miss, a 56-yard field goal. Had this play stood, New England quarterback Tom Brady would have had the ball on the 46 yard line.

Instead, however, the referees called New England defensive lineman Chris Jones for an unsportsmanlike conduct penalty because he appeared to slightly push his teammate forward during the field goal attempt. A new rule (Rule 9, Section 1, Article 3, to be exact) implemented for the 2013 season states that “Team B players cannot push teammates on the line of scrimmage into the offensive formation.”

The referee interpreted Jones’ actions as breaking this rule, resulting in the penalty. The penalty, which moved the Jets 15 yards closer to the end zone and gave them a first down, made the Jets’ second attempt at the field goal an easy completion, giving them the victory.

Much of the controversy from this penalty arises from the fact that the rule is intended to apply to players who start in the second level of the defense, which Jones did not; he started the play on the line of scrimmage. For that reason, when Belichick was initially asked about the penalty at the postgame press conference, he said, “You can’t push on the second level. I didn’t think we did that.”

After the game, Jones took personal responsibility for the penalty, saying, “Yeah, it was something we talked about probably during camp and stuff, and it just slipped out of my mind. So I just, it was just my mistake, nobody else’s. I’ve just got to man up and fix it next time.”

However, by the time Belichick began his weekly conference call he holds the day after each game, he appeared to have somewhat modified his opinion of the penalty – or at least his public commentary about it. He stated, “Obviously we are wrong…It’s our job to understand the rules. Whatever the bottom line is, we didn’t do it properly.”

He also stood up for his player, saying, “We’ve got to coach it better. What he did was basically what he was being told to do.” Although the penalty and the game as a whole will continue to be dissected, discussed and debated ad nauseum by fans and analysts alike, Belichick and his staff appear to have chosen to simply put the issue behind them and focus on the remainder of the season.