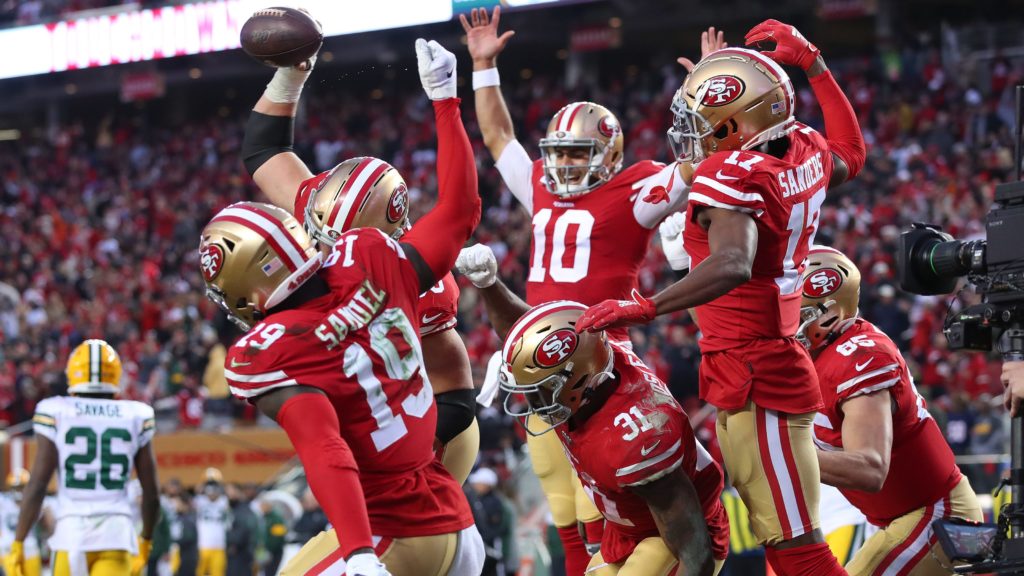 If there is an NFL division race in 2020 that is going to come down to Week 17, it just might be the NFC West. We have last year’s NFC champion San Francisco 49ers as the early favorite to repeat, but both Seattle and the Los Angeles Rams are in a position to take away the Niners’ crown.

The Rams won division titles in 2017 and ’18 and the Seahawks took the crown in 2016. Then, there is the Arizona Cardinals. They have the reigning NFL Rookie of the Year in QB Kyler Murray and added one of the league’s best wide receivers in DeAndre Hopkins via a trade in the offseason.

Betting Odds: The Case for the 49ers

General manager John Lynch and head coach Kyle Shanahan worked tirelessly to assemble a roster that would produce championships. The first two came last year – an NFC West and NFC titles. San Francisco is certainly built to do it again in 2020. That is why they are -115 betting odds favorites.

The 49ers running game is outstanding. They were second only to Baltimore averaging 144.1 yards per game last season. QB Jimmy Garoppolo’s first full season as a starter was a success after throwing for 3,978 yards and 27 touchdowns.

The defense was even better. The Niners were No. 1 against the pass and second in total defense last season. Reigning NFL Defensive Rookie of the Year Nick Bosa should be even better in Year 2. Add in another rookie, first-round draft pick Javon Kinlaw, at defensive tackle and San Francisco should have another outstanding defense in 2020.

The easy bet, of course, is on the 49ers, but bettors looking for a higher reward can look to either Seattle or the Los Angeles Rams. The Seahawks are given +350 betting odds to win the division; the Rams are at +400.

Both offer some solid value. Any team with Russell Wilson at quarterback always has a chance. Not only is Wilson a great quarterback, but he is also betting an incredible leader that can often will his team to victory. The problem he will have in 2020 is a reassembled offensive line.

Head coach Pete Carroll and the Seahawks also went out in free agency and signed veteran TE Greg Olsen. If he can stay healthy, Olsen will be a great complement to wide receivers D.K. Metcalf, Tyler Lockett, and Phillip Dorsett II.

Where Seattle may have some difficulty is on defense. The Seahawks will likely lose both Jadeveon Clowney and Ziggy Ansah in free agency. They did draft LB Jordyn Brooks with their first pick, but he is a run-stuffing tackler, not the pass rusher the Seahawks need.

While the Seahawks may struggle defensively, there is always the Rams at +400. But, L.A. will not have RB Todd Gurley any more. Gurley is now in Atlanta as is DE Dante Fowler. The Rams also lost their best linebacker in Cory Littleton and DE Michael Brockers.

On offense, it should be much of the same. QB Jared Goff threw for over 4,000 yards again (4,638) to a pair of 1,000-yard receivers in Cooper Kupp and Robert Woods. The play-action passing game of head coach Sean McVay is one of the best – and most difficult to stop – in the NFL.

To replace Gurley, the Rams took Florida State RB Cam Akers with their first pick of the 2020 draft. The question on whether to bet on Seattle or L.A. simply comes down to which team you believe can make up for its offseason losses.

Arizona is probably a year or two away from competing, but they will play a fourth-place schedule in 2020. With Murray slinging the ball to Hopkins and RB Kenyan Drake running all over the yard, anything could happen.

After the season opener with San Francisco, the Cardinals have four very winnable games – Redskins, Lions, Panthers, and Jets. The Cards will have to play better defense and somehow win some division games. At +500 betting odds to win the division, Arizona is a huge risk.