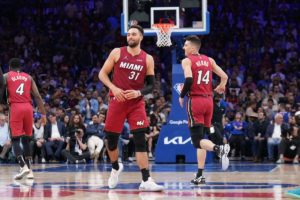 Bettors should be sure they understand the different types of prop bets as well as how the odds work. It’s not difficult and the average bettor can find some success in betting NBA player props fairly quickly.

Traditional NBA bettors bet more on moneylines, spreads, and totals. The rise of daily NBA fantasy games has helped to increase the number of bettors wagering on player props.

NBA player props have a greater impact on a game compared to NFL player props. There are only five players on an NBA team and one player’s performance can greatly impact a game. Bettors like that kind of action.

Of all NBA player props, the most popular is a bet on an individual player’s scoring total. You can bet either side of a player’s listed point total. Take the following as an example.

Whether a team wins or loses has no bearing on this bet. It’s only about Doncic’s individual performance. If Doncic is playing against the worst defense in the NBA, you may like the Over. That’s one of the advantages to betting an NBA player prop.

There are prop bets for every NBA statistical category – rebounding, assists, steals, blocks, etc. Then, there are the combination categories. You can bet on a player’s total number of points and assists, for example.

Just about any combination of stats is possible. The most popular of the combination player props is the PRA bet. PRA stands for Points, Rebounds, and Assists. It’s exactly as it sounds. You wager on whether or not a player will go Over or Under a set number of points, rebounds, and assists added together.

If Doncic records 28 points, nine rebounds, and four assists; his PRA total is 41. If his PRA player prop total is 40.5, anyone that bets the Over is a winner.

There are also categories like double-double or triple-double. These are Yes/No wagers at most sportsbooks. Bettors wager on whether or not a player will record a double-double, which could be points and rebounds, points and assists, or any other combination of stats.

There is nothing more important than research when betting NBA player props. When doing the research, one of the keys is to look for matchups. Doncic going up against the best defensive team in the league should be duly noted. If he’s going up against a poor defensive player for most of the game, maybe the Over is the best bet depending on the number. Matchups are one of the biggest determinants when it comes to prop bets. Regardless, the research is key when betting NBA player props.

The other thing bettors can do is to find a pair of bets that go together. For example, you can pair a player prop with a whole game bet. If you liked Doncic to go Over his scoring total, you may also like Dallas and its opponent to go Over the game total. You would especially like that against a team that ranks poorly in defensive efficiency.