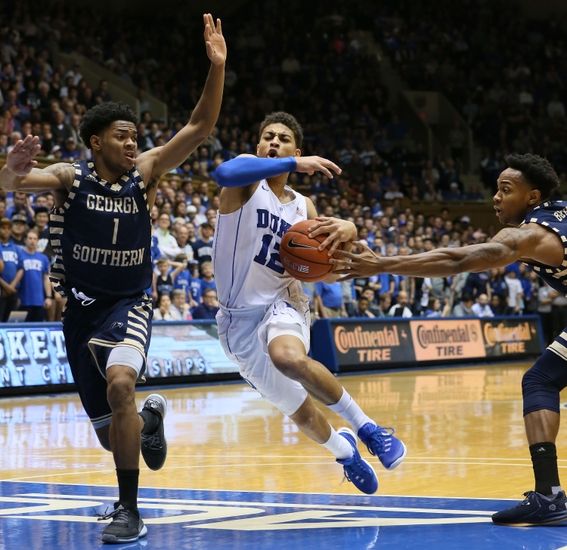 Georgia Southern brings back all five starters for the second consecutive season and is poised to make a serious run at the Sun Belt Conference title under the leadership of head coach Mark Byington.

The backcourt is enhanced by senior wings Mike Hughes and Jake Allsmiller, both of whom are healthy and expected to make immediate contributions for Byington.

Brown currently leads the team in scoring with 19.0 points per game on 55.4% shooting from the field and 57.1% from beyond the arc. Smith isn’t far behind, averaging 18.0 points and 5.2 rebounds per game. Hughes is the third leading scorer with 11.6 points per game.

The most impressive transformation involves Allsmiller, who arrived at Georgia Southern tipping the scales at 16 points. Fast-forward to 2017 and the 6-5 senior is nearly eclipsing 200 pounds, which allows him to play multiple positions with the added muscle.

Allsmiller is fourth on the team with 9.4 points per game. While Georgia Southern’s frontcourt isn’t the Sun Belt’s best, Byington welcomes back a quartet of experienced forwards, including junior Coye Simmons (6.4 rebounds per game).

Forward Montae Glenn is having a breakout campaign in the early stages, averaging 9.4 points per and leading the Eagles in rebounds with 9.6 per game. A strong recruiting class gives Byington added length and athleticism that was missing last season.

Indeed, the Eagles are averaging 43 rebounds, including 10 offensive, per game. Finally, Georgia Southern’s seniors feel the urgency to win now as their collegiate careers come to an end, while a talented group of freshmen will push everyone to be better during practice.

Off to a perfect 5-0 start to the 2017-18 campaign, grab the available points with the Eagles as Oskeim Sports’ Basketball Best Bet for Wednesday, November 22.