AFC West Betting Odds: Are the Chiefs Destined to Repeat? 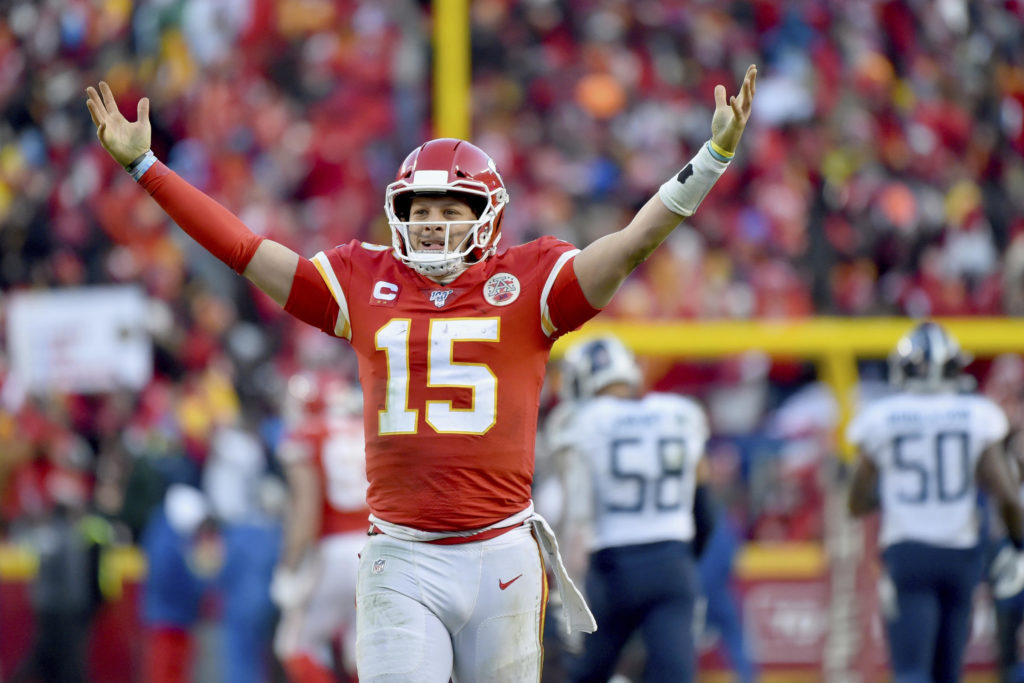 The Kansas City Chiefs have won the last four straight AFC West Division titles. Is there any reason to believe they will not win a fifth? Oddsmakers believe in head coach Andy Reid and Chiefs so much they have made them an overwhelming betting odds favorite to win the division. Most bettors also back the Chiefs to win Super Bowl as well.

So, in 2020 the AFC West is Kansas City’s to lose. Denver, the Las Vegas Raiders, and the L.A. Chargers all should be better, but they will have to have improved exponentially to dethrone the four-time champion Chiefs.

The big Chief is, of course, Super Bowl MVP Patrick Mahomes. He is arguably one of the best at his position. Mahomes doesn’t do it alone either. He has a core of weapons that got even better after the NFL draft.

Returning are TE Travis Kelce, who led the team last year in receptions (97) and receiving yards (1,229). He made up for Tyreek Hill who missed four games with an injury. Hill had 58 catches for 860 yards and seven touchdowns. Sammy Watkins is a capable No. 3 receiver with 52 receptions and 673 yards last season.

Kansas City returns RB Damien Williams (17 carries, 104 yards, 1 TD in Super Bowl LIV) and upgraded the position with the drafting of LSU’s Clyde Edwards-Helaire. Not only can Edwards-Helaire run – 1,414 yards and 16 TDs in 2019 – but he is an outstanding pass receiver out of the backfield. He caught 55 passes for 453 yards last season.

The Chiefs improved on defense in 2019 and that helped them get over the hump and win a Lombardi Trophy for the first time in 50 years. With virtually the same key players, the Chiefs are a -400 betting favorite to win the division for the fifth straight year.

AFC West Betting Odds: The Best of the Rest

A bet on the Chiefs is safe, but is there another play in the AFC West? It is entirely possible. The play comes down to which of the Broncos, Chargers, or Raiders emerges as a real contender. It’s hard to imagine the Chargers being that contender after losing veteran QB Philip Rivers to Indianapolis in free agency.

The Chargers drafted Oregon QB Justin Herbert as the quarterback of the future, but the starting role will likely be filled by journeyman Tyrod Taylor. The former Ravens draft pick in 2011 has only started 46 NFL games, 43 of which came while in Buffalo from 2015 to 2017. With Taylor running the offense and no more Melvin Gordon at running back, it’s hard to see the Chargers at +650 betting odds keeping up with the Chiefs.

The Broncos might be a good play with their current rebuilding efforts. They picked QB Drew Lock last year and he eventually became their starter. Lock started the last five games last season and led Denver to four wins. That might give the Broncos some momentum heading into the new season.

What also makes Denver an interesting wager at +700 betting odds to win the division is the defense. Former first-round pick DE Bradley Chubb missed 12 games last season. He will be back to pair with OLB Von Miller to form one of the NFL’s best pass rush duos. In Chubb’s rookie year (2018), the pair recorded 26.5 sacks.

Then, you add in the Broncos 2020 draft. GM John Elway set out to find Lock some weapons and he succeeded. Denver took Alabama star WR Jerry Jeudy with their first pick and the speedy K.J. Hamler of Penn State.

In the fourth round, the Broncos may have gotten the surprise pick of the draft – TE Albert Okwuegbunam, who played wide receiver in high school and ran a 4.49 40-yard dash at the NFL combine.

If the Chiefs stumble, the Broncos might be the only offense that could hang with the defending champs making a small bet on Denver a worthwhile hedge.

Denver probably makes more sense than the newly named Las Vegas Raiders, who sit at +800 betting odds to win the AFC West. Head coach Jon Gruden and GM Mike Mayock know what they are doing, but winning the division this year is a stretch.

Las Vegas also added to its receiver arsenal in the draft taking Henry Ruggs III from Alabama with their first pick. Ruggs ran 4.27 in the 40-yard dash at the combine and Gruden is expected to take advantage of that speed.

Gruden also took Kentucky’s Lynn Bowden, an incredible athlete who played quarterback for the Wildcats but projects as a wide receiver for the Raiders.

Gruden should have the weapons on offense, but until the Raiders can improve on defense – they gave up 26.2 points per game last year – there is no way they can overtake the Chiefs in the AFC West.