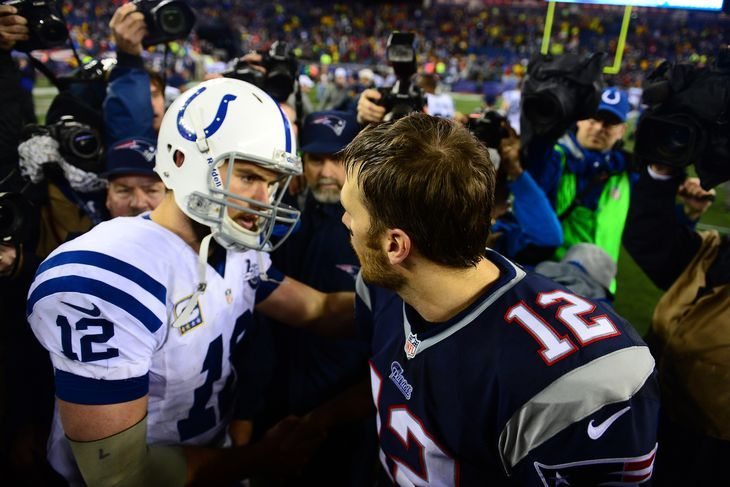 I also like the fact that New England’s attack is averaging 33.2 points per game on 392 total yards at 7.1 yards per pass play, 5.8 yards per play and 11.8 yards per point at Gillette Stadium. New England’s offense kicked into high gear in week five of the regular season when Rob Gronkowski fully regained his health. In fact, over the next eleven games, Tom Brady averaged 294 passing yards with a 66% completion rate and a 29-7 ratio. During that 11-week stretch, Gronkowski accounted for 30% of the teams yards and 16% of the team’s receptions.

New England is +30.0 net yards per game at home this season with an average scoring margin of 33-18. The Patriots have also gone 5-1 SU and 4-2 ATS versus playoff teams for +38.0 net yards per game. As for today’s opponent, New England is a perfect 3-0 against Indianapolis over which time the Patriots have has outscored the Colts 144-66. Those results include a 43-22 rout in a divisional playoff game last season and a 42-20 road win November 16. While Indianapolis quarterback Andrew Luck has guided the organization into its fifth conference championship since the franchise moved to Indianapolis, the former Stanford gunslinger has struggled against the Patriots.

To say that Luck has struggled to figure out coach Bill Belichick’s defensive schemes would be a gross understatement. In three games against New England, Luck has compiled the following statistics:

The betting public has overreacted to New England’s lackluster performance against the Ravens last week. Prior to that game, and excluding New England’s meaningless season-finale against Buffalo, the Patriots had gone 11-1, scoring 414 points on 34.5 points per game. The Patriots also limited opponents to just 17.2 points per game on 206 total yards during that stretch. And, while the Colts’ aerial attack is impressive (0.7 yards per pass play better than average), that fact should not deter New England investors in light of the following:

Finally, off-the-field distractions have plagued the Colts all week as one player was charged with rape, another player was left behind in Indianapolis and a third player was ruled out because he missed the team plane. Linebacker Josh McNary allegedly committed the sexual assault, while running back Trent Richardson was left behind despite vowing last week that “being inactive will never happen to me again. Anyone can quote me, today, because it’s never going to happen again.” I guess general manager Ryan Grigson and head coach Chuck Pagano didn’t get Richardson’s memo.

Take New England in the AFC Conference Championship game and invest with confidence.