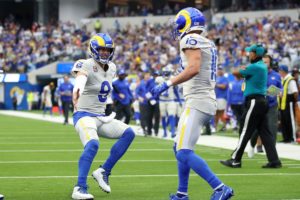 After last year’s Chiefs-Bills Divisional Round playoff game, the NFL went back and adjusted its overtime rules for the 2022 season. Both teams will now have the opportunity to possess the ball. Under the old rule, if a team scored a touchdown on its first possession of overtime they were declared the winner.

The new rule and the unique situation of overtime in NFL games bring up some great questions. How exactly are bets handled when a game goes to overtime? What trends exist in relation to NFL overtime games?  These are great questions and the answers can help bettors navigate the 2022 season.

Most sportsbooks add a disclaimer that says something to the effect that all bets include overtime unless otherwise noted. That means if you had the Chiefs -2 in that Divisional playoff game you would have won. Kansas City won in OT 42-36.

Moneyline bets are the same. If you wagered on Kansas City, you won. If a game does end in a tie – that is still possible in the regular season – the moneyline bet would be graded as a loss. That outcome is pretty rare as we will see.

Overtime applies to totals bets as well. Usually, Over bettors love when games go to Overtime and Under bettors not so much. The bottom line is that overtime is counted as part of an NFL and counts toward all bets. Bettors can also find live bets during an NFL overtime.

Since 1974 when the NFL adopted overtime, 574 games – regular season and postseason – have gone to an extra period. Only 27 have ended in a tie. Seventeen of the ties occurred between 1974 and 2011. Only five have happened since the NFL reduced the overtime period from 15 to 10 minutes in 2017.

There have been 11 postseason overtime games. The team that wins the overtime coin toss has gone on to win 10 of those games. The only team to lose was the 2018 New Orleans Saints who lost to the Los Angeles Rams.

Under the most recent set of overtime rules prior to the changes this year, there have been a total of 163 overtime games (including the postseason). The team that won the coin flip before overtime has a record of 86-67-10 (52.8%). That makes the 10-1 mark in the postseason even more notable.

The big changes in overtime are related to NFL playoff games. As mentioned, both teams will possess the ball at least once in an overtime playoff game. The game will end, however, if the team kicking off records a safety on the first possession of overtime.

If a game remains tied after both teams have possessed the ball, the game goes into sudden death. The first team to score wins. That may alter some teams’ strategies concerning overtime. A team that possesses the ball first in overtime may elect to go for two after a touchdown. This would force the hand of the opponent and could also affect point spread and totals bets.