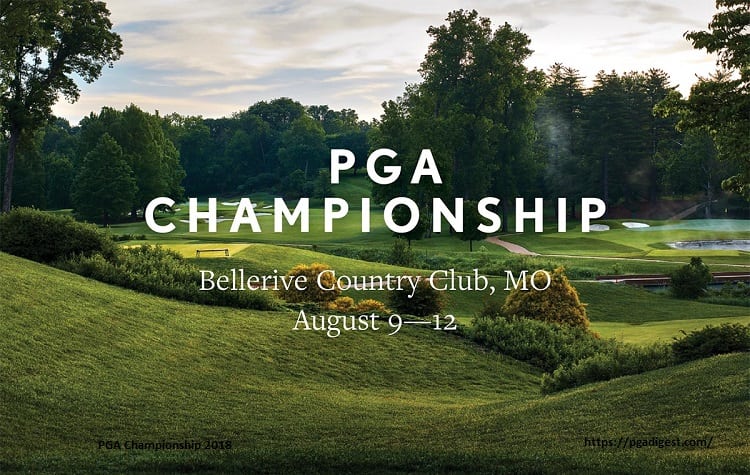 Here at Oskeim Sports, we love to showcase and discuss some of the top current sporting events along with the top betting picks associated with them. This week’s big ticket: the PGA Championship golf major. The PGA Championship began roughly 102 years ago in New York and has grown to become one of the most prestigious golf tournaments across the globe. It is one of the four major championships played in professional golf and has historically been the final major of the year, the night cap of the season if you will. Starting in 2019, however, the PGA Championship will be moving to May and will jump two spots to become the second major played.

This year’s PGA Championship is sure to be a competitive one as the purse of $10+ million is certainly very appealing, however, just like the other majors, the real glory may fall within gaining privileges to playing in the other three majors. If you are crowned the winner of the PGA Championship by hoisting the Wanamaker Trophy, you are automatically invited to play in the other three majors for the next 5 years which is quite an amazing opportunity and certainly life changing for those athletes!

The reigning champ is currently Justin Thomas who won last year’s PGA Championship at Quail Hollow Club in Charlotte, NC. This year’s tournament is headed toward the mid-west and will be played at Bellerive Country Club in Town and Country, Missouri. The tournament tees off Thursday, August 9thso be on the lookout for many familiar names to lead the pack, and who knows, maybe Tiger will be competing on Sunday just as he was a couple weeks back at the Open Championship.

Before you make your golf picks for the 2018 PGA Championship, take a look at some of our thoughts and early odds on who we believe will win.

The players hitting the fairways just outside of St. Louis this year will be competing in what is the 100thedition of the PGA Championship. Oddly enough, since 2012, the first initial of the winner has either been a‘J’or a‘R’.In all seriousness though, Justin Thomas, Jason Day, Jordan Spieth, Justin Rose, Jon Rahm, Rickie Fowler, and two-time PGA Championship winner, Rory Mcllroy, should all be considered contenders at Bellerive. Out of this group, we have a feeling Jason Day is a great golf pick for this weekend. We believe he will be working late on Sunday as he has been pretty consistent thus far this year and has been putting on a clinic lately around the greens. Out of this group, we also think Rickie Fowler is a top pick to win this year’s PGA Championship. We’re pulling for him as he continues to try to earn that first major win. Crazy as it sounds, this is also his last major performance of his 20’s as he will turn the big three-o in December.

Now, there are plenty of guys that don’t have first names beginning with a‘J’or‘R’that we think will be competing this upcoming Sunday. One guy to keep in mind this weekend is surely Dustin Johnson. Dustin Johnson is one of our top picks for the 2018 PGA Championship because he rarely three-putts, has 11 top 10 finishes so far this year, and is averaging a 68.8 each round right now.[1]

Sometimes you just need to place bets on those that are hot at the right time and no one is hotter right now than Francesco Molinari. With two top-ten finishes, not missing a cut at all this year, and three wins including a major, don’t be shy on putting some money on Molinari.

For our dark horse pick, who other than Tiger Woods. He had the lead on Sunday at the British Open and was so very close to finishing the job. With said performance, he will actually be heading into Bellerive with his first top-ten finish at a major in roughly 5 years, so we are hoping he has some momentum in Missouri.

At the end of the day, the Town and Country van heading into Sunday’s battle will be full of some familiar faces. We think the top picks for the 2018 PGA Championship are Jason Day and Dustin Johnson just based on their consistency and their need to continue to prove themselves at the highest level. All in all, we’re hoping for an amazing tournament that will live up to the 100thcampaign of this historic event!